From infecting yourself with e.coli to burning down your supervisor’s lab.

if you thought you were having a bad day in the lab then these stories will make you feel incredibly lucky! 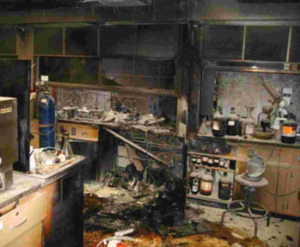 When you’re in the lab every day, it can sometimes be easy to forget you’re handling some incredibly dangerous substances and in a brief moment of forgetfulness an accident can happen. If you’re lucky, you’ll get away with nothing more than your pride being wounded but for some the consequences can be far worse, as a thread on the website Reddit made very clear!

When one of the site’s users, who goes by the username mmm_whatcha_say, asked: “Scientists of Reddit, what is the worst thing that has happened in your lab?” some truly horrifying stories emerged.

We picked some to share with you. If you’re not already a stickler for COSHH assessments, you will be after reading these stories!

“Grad student left a hot plate on, burned down his/her advisors’ lab, entire floor of the building destroyed by smoke and water damage. Nobody killed but the advisor’s rare collection of butterfly wings went up in. smoke – he’d been studying evolution of butterflies and had to abandon that. Took about a year to rebuild everything and get back on track.
That was 20 years ago and I still have a big sign in the lab where people will see it when they leave: “IS THE HOTPLATE OFF?””

“a girl in my lab forgot to turn the blower on in the hood and inhaled a small amount of an e. coli toxin we were supposed to put in solution. didn’t feel well, went to the ER, got pneumonia, then got an intestinal infection. her mom had to fly to the east cost from california to take care of her when she couldn’t leave her apartment for two weeks. it’s a month later and she still hasn’t fully recovered.”

“Previous Post Doc in my lab had a bad habit of touching/pushing hair away from her face whilst wearing gloves. She continued this habit whilst making her own poly acrylamide gels for protein seperation. Only figured out it was very bad when her hair started to fall out in a very specific spot on her head.”

“Grad student decides to use an ultracentrifuge, needing to spin at about 1,000,000g (~9800km/s2). Decides to load it with all his samples on one side of the drum (unbalanced). During spin up, the drum rips itself off the motor arm and shreds the interior machinery as it bounced around. RIP ultracentrifuge. Luckily it failed during spin up, as if it had failed at max speed it probably would have shot out of the housing and gone through the wall or killed someone.”

“3rd year chemistry student chucked a lump of sodium in the aqueous waste (chemicals dissolved in water that can’t go down the sink) by mistake. Blew the container apart, and ignited at least one of the more flammable waste containers it was next to, which blew the fume cupboard apart and a hole in the wall.

After that everyone in the university had to fill in a full COSHH assessment for every single lab, no matter what it involved.”

“I set the table on fire.Finishing dissecting a human brain for the day and go through flame sterilizing every implement after soaking them in EtOH, one of the forceps had too much ethanol stuck in the gap and a flaming drop landed in a puddle of more ethanol. The entire table was covered in plastic for easy disposal (also biohazardous waste precautions) and went up in flames in an instant. Resorted to putting it out with a squirt bottle. No lasting damage, the specimen had already been put back into storage, but the entire lab smelled like a campfire for a week.”

“20 years ago, I dropped a 4 liter beaker. Instead of getting away from falling glassware as we are all trained to do, I tried to catch it. The beaker struck the bench and shattered just as my hand went through it. It shaved off the side of my right middle finger. Went to the ER, but there wasn’t enough skin to stich…just had to leave it open and wrapped for weeks until the tissue scarred over. I’ve now got a large keloid scar on that finger, which always reminds me to be more careful. I’m now our laboratory’s safety officer and use it as an example for laboratory safety.”

“I used to check the cleanliness of glassware by sniffing. This stopped when I checked a beaker that had previously held ether.
Also, I was distilling lime oil (I work for a flavor company) and forgot to open the vacuum valve. So, instead of the vapor being pulled through the still, it collected and built pressure. This resulted in a stopper blowing out and filling the room with green, citrusy vapor.”

What’s the worst lab mistake you’ve made? Why not share it in the comments section below and let others know they’re not alone – we all slip up once in a while!